Besides having so many interesting places to go, Indonesia has some collections of delicious culinary that cannot be found in other countries in all over the world, why? It is because those foods represent the characteristic where it comes from for example Ayam Taliwang. 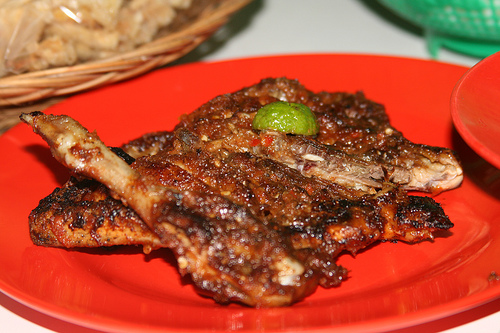 If you visit in Mataram, West Nusa Tenggara you have to pass by to taste its traditional food called Ayam Taliwang. Basically Ayam Taliwang is a food which uses baked chicken as its main ingredient. It is different from other chicken recipes because Ayam Taliwang has to be made only from chicken whose age is three until five months that is why the size of Ayam Taliwang is so small, but never underestimate its taste. To eat Ayam Taliwang, you have to prepare 5 liters water because it is very hot until its bone that makes it so famous. It is an original food from Kampung Taliwang, Mataram, West Nusa tenggara, but it can be found easily near from Senggigi beach, Lombok. For those who live outside from West Nusa Tenggara, they can easily find Ayam Taliwang in Jakarta or in Bali, the closest island to Lombok. You can find plenty of Taliwang restaurants here.

You also can make it on your own by preparing the ingredients such as kampong chicken (divide into 2 parts), citrus fruit, salt, water and oil. For pounded spices, prepare red onion, garlic, red chili, galingale, terasi, tomato, salt and Java sugar. Cover the chicken with citrus fruit and salt for almost 30 minutes. Sauté pounded spices until it smells good, pour the chicken. Pour the water until it is cooked then bake it above the coal until it smells good. It will be difficult to get the same taste in the first time, but after you get used to it, you will get its original taste.